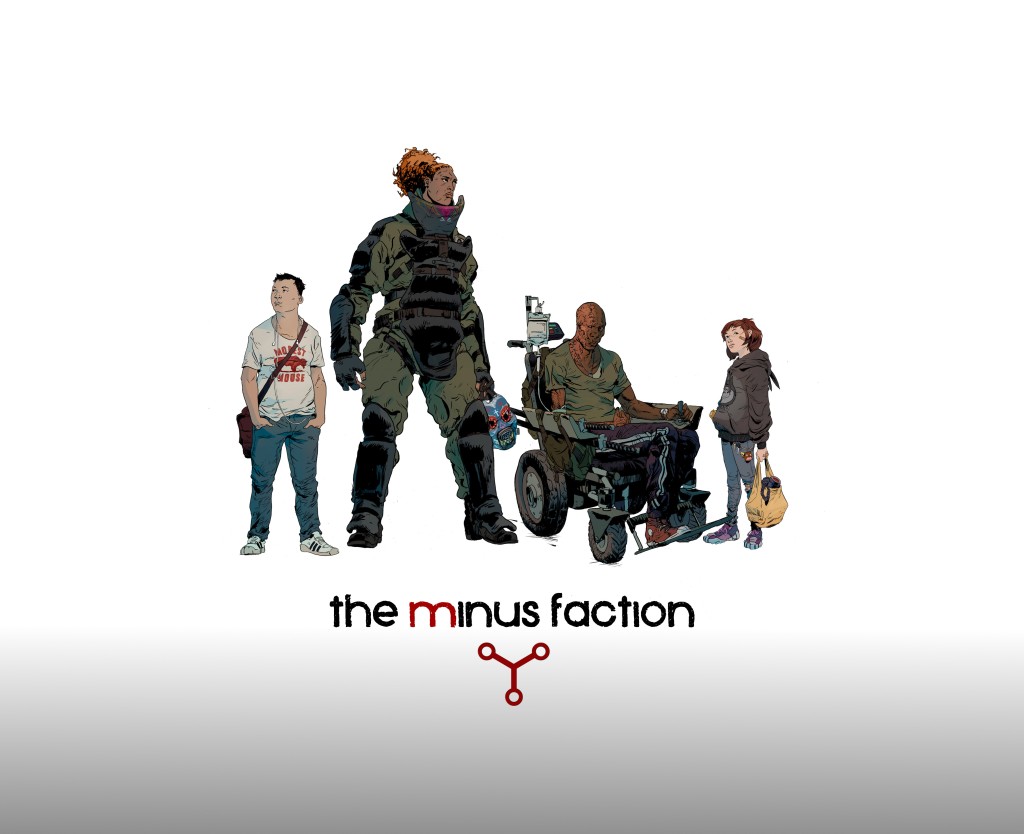 The door was already open.

Dr. Amarta Zabora removed the key to her office and pushed the door with her knee. It was heavy, designed to keep the voices inside from being heard in the hallway, and she lost her balance for a moment. It didn’t help that she had a purse hanging from one arm and a stack of files in the other. She was tired of carting hard copies between work and home. She couldn’t wait for the new secure system.

The sun shone through windows on the left. A woman was sitting behind the desk, her desk, reading her computer screen. Amarta stood in the door, shocked. The woman was African-American, 30-ish, with short, straightened hair pinned to her scalp and a simple striped jacket and slacks. She didn’t even look up.

“Excuse me.” Dr. Zabora objected. Her hair wasn’t nearly as well-kept as the intruder’s. “Who the hell are you?”

“Relax, Doctor.” The woman clicked the mouse. She didn’t turn. “I’m one of the good guys.”

“What’s that supposed to mean?” Amarta dropped her purse and files on the floor of her office and stepped forward. Everything scattered across the taupe carpet. “You’re not supposed to be in here.” She looked at the half-turned screen. “Those files are confidential!”

“Calm down, Doctor. Please. Have a seat.”

Amarta put her hands on her wide hips, then crossed her arms. It bunched her white coat. She stared. She was a head shorter than the interloper, with a round face and the dark complexion of her ancestors. Scraggly strands of gray poked from her jet-black hair. She kept staring as if to say, but you’re in my seat.

The intruder stood and smiled. “My name is Ayn.” She extended a hand across the bare wooden desk.

Dr. Zabora cleaned her desk every day before she left. She kept her arms crossed. She knew what was happening. She was a psychiatrist after all, trained to diagnose on all kinds of personal cues, appearance and behavior and the rest of it. “Ayn” was an anomaly. Genial people wear a wedding ring or they have a cowlick or shoes scuffed from a slight pigeon toe. Or maybe their necklace dangles a cross or a locket or Grandma’s old pearls. Normal, healthy people have tiny tells, subtle hints of personality that might be useful in therapy.

Ayn pulled a blue tri-fold from her jacket. “This is an order from the Judge Advocate General’s office giving me access to all notes and files on one of your patients.”

Amarta didn’t take it. She walked around the desk and waited for Ayn to move. Apparently they were having a battle of wills. It’s too early for this, she thought. On a Sunday.

Ayn smiled again and set the order on the desk. She walked past the doctor slowly and settled into the visitor chair near the window.

Dr. Zabora sat and sighed. Her seat was still warm. It annoyed her. It would take half an hour at least to fix all the files she’d left scattered on the floor. That annoyed her, too. She glanced at her computer screen and then picked up the tri-fold. “What’s this about?” She opened the packet of papers.

Ayn waited for her to finish reading.

Amarta flipped from one page to the next, then tossed the packet across the desk.

Ayn folded it and put it back in her jacket. “What do you know about Captain John Regent?”

“Not as much as I should. His service record has been heavily redacted.” It was an accusation.

“Did he ever discuss the circumstances of his capture with you?”

Dr. Zabora shook her head. “John has been reluctant to talk about anything but his family.”

“Is that unusual for these military types?”

Military types. Amarta repeated it in her head. “Ayn” wasn’t a soldier. And she hadn’t dropped any credentials, which meant she probably wasn’t a lawyer either. They’re always quick to share.

“Oh come on. You know how it is. All these big, tough boys keeping their feelings buried under a mountain of rage.”

Ayn was baiting her. “Captain Regent isn’t like that.”

“How long have you been here, Doctor? At this hospital?”

“Something tells me you already know the answer to that question.”

“You’ve been a contractor with the DoD for fifteen years. Where were you stationed before?”

“I didn’t see anything in your court order about me.”

Ayn smiled again and sat back. “Doctor Zabora, can I call you Amarta?”

“Amarta, let’s be open with each other.”

“That would be a nice change.”

“You and I are never going to be friends. We’re never going to exchange bundt cake recipes or share wedding pictures. I don’t care if you like me or not. But I have a job to do, and it requires your assistance.”

She stopped short of a threat.

Ayn continued. “You were stationed in San Diego before this, correct?”

“That’s a long move, coming all the way here to Philly, especially with your whole family still in Southern California.”

“Ayn? Can I call you Ayn? I assume so since you haven’t bothered to give me your real name.” Dr. Zabora sat forward and rested her hands on her desk. “I’m a board-certified psychiatrist specializing in the treatment of post-traumatic stress disorder. I also have a master’s degree in cognitive psychology and nearly two decades’ experience playing mind games, like this, with some of the smartest and most heavily damaged psyches in the world.”

“Let’s pretend that you artfully steered the conversation to Sergeant Wilkins and the shooting and I’ll stipulate that he’s the reason I was moved here and that it was a tragedy and that that whole episode continues to cast a shadow over everything I do. Yes, I think about him every day. Yes, I wonder if there was something I missed. No, I am not suffering a crisis of confidence because of it.”

“Is that what you think I meant?”

“Do you really want to know what I think?”

Ayn motioned for Amarta to continue.

“I think it’s very easy to manipulate people when you genuinely don’t care about them. At all.”

“Are you saying I’m a sociopath, Doctor?”

“Isn’t that what the NSA looks for?”

Ayn didn’t acknowledge the acronym. She simply rested both hands on her knee and gave a patronizing, mock-patient look.

Dr. Zabora could feel her heart rate increase. “You’re not a soldier. You’re not with JAG. The CIA doesn’t work domestically. Shall I keep going?”

“Your intelligence was never in question, Doctor.”

“It’s a fair question given what happened.” Ayn was serious.

Amarta took a deep breath and looked out the window at the green lawn that surrounded the campus. Beyond that, the city.

It never ended. It would never end.

Ayn went for the throat. “Sergeant Wilkins killed three people. And himself.”

Dr. Zabora looked back from the window. “Get to the point, please.”

“Doctor, do you know what Captain Regent is?”

“No. He’s a weapon. And it’s my job to determine whether he poses a threat.”

“That’s funny.” Dr. Zabora glowered. “I thought that was my job.”

“See?” Ayn opened her hands wide. “We’re on the same side after all.”

Amarta lowered her voice. “Why are you here?”

“We need time to complete our investigation.”

“Yesterday he asked to be discharged.”

Amarta wondered how long they’d been “investigating” him, reading her reports without her knowledge. Sometimes she really hated working for the military. Sometimes it was the most rewarding job in the world. “He has family coming to pick him up tomorrow.”

“And we’re not asking you to treat him like one. According to every official U.S. Army report, Captain Regent is a real American hero. Officially.”

“The most I can do is hold him for seventy-two hours. IF I feel he is a threat to himself. Or others.”

“We’re not asking you to do anything you’re not comfortable with.”

Yes, you are, Amarta thought.

Ayn sensed the hesitation. “I can’t give you details, of course. But I can tell you this. After walking out of a very, very secret base of operations, Captain Regent was captured by forces unknown and held for not less than six months and not more than eighteen. In that time, he was tortured and beaten and made to endure—”

Dr. Zabora interrupted. “The fracture patterns on his femur, tibia, and fibula indicate his legs were broken, repeatedly, with some kind of precision tool and then allowed to heal. The contact marks and burn pattern on his skin suggests he was hooked up to a generator or battery while being drenched in gasoline. His face was burned with aci—”

“Really? How wonderful. Then you know he’s suffered enough. He’s in constant pain.”

“And yet he refuses medication.”

Amarta rubbed her cheeks in frustration. Give me a suicidal patient any day. Anything other than a spy.

Ayn didn’t stop. “I’m not board-certified in anything. I didn’t go to Berkeley.” She nodded to Amarta’s degrees on the wall of the office. “I just went to some plain ol’ state college down South. But I read something recently. Maybe you can tell me if it’s true.”

“Patients engaging in masochistic behavior are often punishing themselves for something. Is that right?”

“It’s not that straightforward.”

“But it is a possibility.”

“Doctor, whether you are or not, a lot of very smart people are bothered that Captain Regent refuses to state why he went AWOL. Or who his captors were.”

Dr. Zabora looked down at her desk and waited for Ayn to finish her sales pitch.

“You probably don’t know this, but he was found dragging himself, one-armed, through a desert two hundred miles from his last known location. Barely alive.”

Amarta looked up. “I’m guessing that was in a part of the world we’re not supposed to be in.”

Ayn ignored the quip. “And no one has any idea why a highly decorated soldier with an impeccable service record suddenly walked off the reservation. We don’t know where he was or who took him or why they let him go.”

Amarta snorted. “Or what he told them while he was gone.”

Dr. Zabora took a deep breath and exhaled. John’s service record had more black line than text. It was obvious he had seen things, secret things, embarrassing things. The cynic in Amarta wondered if that’s why they let him come home. They needed him to relax, get comfortable, so they could uncover what he revealed. And to whom.

Otherwise they would have just eliminated him.

And now the powers-that-be wanted Amarta to declare him a risk to himself and hold him at the hospital. They would need a judge’s ruling to keep him more than seventy-two hours, but she guessed that would be plenty of time for a well-connected agency to find one.

They didn’t care about John, she knew, and they were holding Derek Wilkins over her head, giving her an “excuse.” Better to be safe, right? Better not to risk another soldier with PTSD snapping and taking a service sidearm to his family. And then himself. No one would contest her decision.

Amarta knew this was just the first round. If she refused, she’d find her career threatened. And after that . . .

Ayn could see the conflict on Dr. Zabora’s face. She stood. “I’m going to interview the staff. But I’ll be around. Do let me know what you decide. Just don’t take too long.”

Dr. Zabora looked up at the dark woman. Ayn wasn’t going to leave until Amarta did what they wanted. Amarta watched as the spy stepped over the pile of spilled files and walked out the door. She took another deep breath.

Now his own country was after him.

a snippet from Episode One of THE MINUS FACTION, available for free.