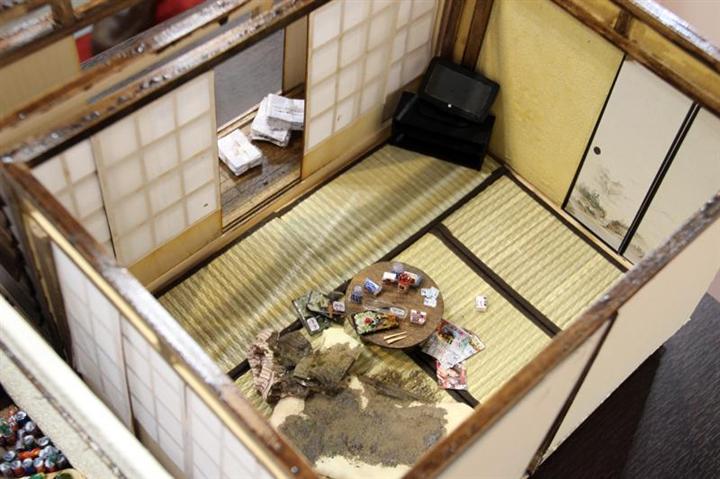 [from The Japan Times]

One diorama at a time, miniaturist reconstructs aftermaths of ‘lonely deaths’

Inside a grimy six-tatami room lies a darkly stained blanket — an ominous reminder of its owner, and his demise.

Scattered on a circular chabu-dai coffee table are empty jars of “one-cup” sake and shōchū (distilled spirits), the moldy remains of a convenience store bento-box lunch and horse-racing stubs — hints that the inhabitant may have met his sudden, solitary death while contemplating his chances at the racetrack.

In another room, a blue tarp holding a pool of blood is spread out below a severed noose tied to a ladder leading up to the loft. On the wall, written in tape, is the word “gomen” (“sorry”), while what appears to be a last will sits on the desk.

Then there’s the bathroom. Here, a red soupy liquid fills the bathtub, its contents unknown, and overflows onto the tiled floor.

This isn’t a walk-through of a horror house or a set of crime-scene photos. These dark scenes are miniature replicas, dioramas of real rooms where occupants have died, recreated with eerily realistic details by Miyu Kojima. 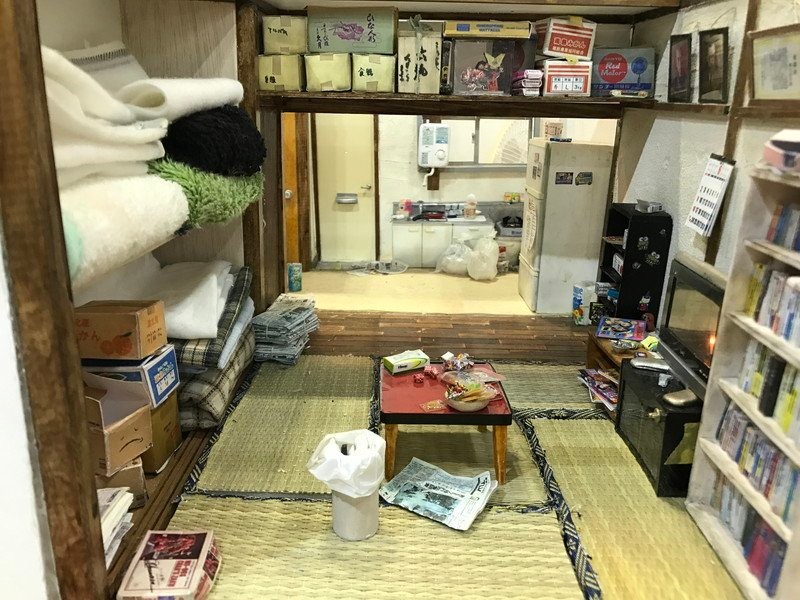 “Each room has its own story and reflects what I’ve seen in my line of work,” says Kojima, a 27-year-old employee of ToDo-Company, a firm that specializes in cleaning up homes with morbid pasts. Her jobs often involve cleaning up after what is known as kodokushi — “lonely deaths” — where those living alone are found dead in their homes, sometimes going unnoticed for days or even weeks.

In Tokyo, 4,777 people died alone in 2017, according to the Bureau of Social Welfare and Public Health. Around a third were found two to three days after their death, while nearly 10 percent were discovered more than a month after they passed away. Meanwhile the number of one-person households in Japan soared to 18.42 million in 2015 from 16.78 million in 2010 and is expected to reach 40 percent of all households by 2040, according to government forecasts.

Kojima first began making her intricate dioramas several years ago, when she created some for a funeral industry trade show that her company participated in. Rather than showcasing “before” photographs of rooms the company had cleaned — which, she says can be too graphic for the squeamish — she thought presenting them as three-dimensional models would convey the gruesome nature of the phenomenon in a more sensitive light.

Attendees to the company booth, surprised by the miniature rooms, took photos of her models and began sharing the images on social media. Kojima soon found herself being interviewed about her work and kodokushi, a widely reported symptom of Japan’s graying, shrinking population that has led to a surge in single-person households. In August, she published “Toki ga Tomatta Heya” (“Rooms Where Time Has Stopped,” a book chronicling her experience as a special kind of apartment cleaner. 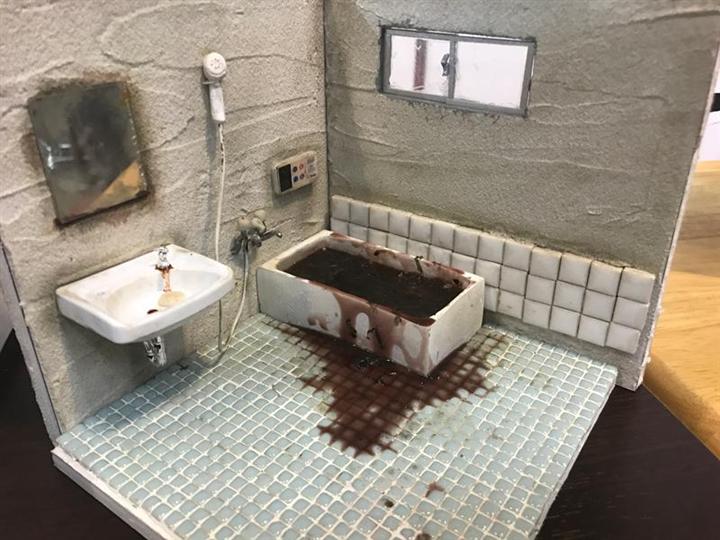 The labor-intensive job isn’t for the faint-of-heart. The stench wafting from the rooms can be overpowering during Japan’s humid summers, while insects often greet the cleaners who all wear protective gear.

A typical day will involve cleaning and clearing rooms for around five to six hours straight, while also sorting through the furniture and belongings of the deceased to determine what goes and what stays. It may be far from a glorious profession but, for Kojima, it was a calling.

Kojima’s father was an excessive drinker, a habit that cost him his job and family. He was living separately when Kojima’s mother, divorce papers in hand, visited him to drive the final nail into their relationship. Instead, she found her husband lying on the floor, unconscious from a stroke.

Kojima, then 17, was able to visit her father at the hospital before he took his final breath, but still wonders what would have happened if her mother hadn’t dropped by his home that day.

“He could have been a kodokushi victim,” she says.

The incident led her to empathize with families who have lost their kin in similar ways. When she was 22, she joined ToDo-Company and became its sole female staff.

Kojima vividly recalls the first time she cleaned a room that was the site of a lonely death. It was late summer and the crew at her company were summoned to an apartment on the second floor of a building, right above a supermarket.

“I could smell it before even setting my foot on the staircase leading up to the room,” she recalls. “And when we reached the entrance to the apartment, I could see cockroaches wriggling in the narrow space under the door.”

The man’s body had already been hauled away, but maggots crawled in the space where he had been lying for several months. Despite being a tiny room equipped with a bathroom, there were plastic bottles filled with urine. Coins were neatly lined up as if the owner was counting off the days on a calendar.

“After we cleaned the room, we invited a monk to purify the property. When everyone was gone and I was left alone, I mumbled a short prayer wishing the person could go to heaven,” Kojima says. “At that moment, something brushed against the back of my neck, and I felt it was a sign that my prayer was heard.”

Of the models Kojima creates, she says that rather than replicating specific rooms in precise detail, she tries “to capture the essence of the characteristics that I noticed while cleaning them out.”

She also assembles models of another kind of cleaning job — the clearing out of so-called gomiyashiki  (“trash houses”), homes cluttered with unnecessary junk and garbage. Clients, she says, are frequently embarrassed owners pretending to make a request on behalf of a family member or friend.

Everything is made from scratch, Kojima says, and it takes around three months for her to create three rooms. For her next project, she plans to introduce a different medium into her creations — something to also celebrate the lives of those who have died in the rooms that she helps clean.

“I’m thinking of projecting 3D images of people moving in my models to show that despite the way they may have died, these people all led regular lives,” she says. 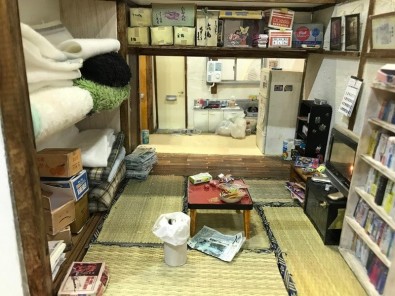 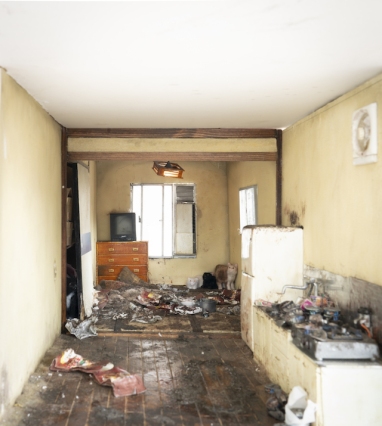 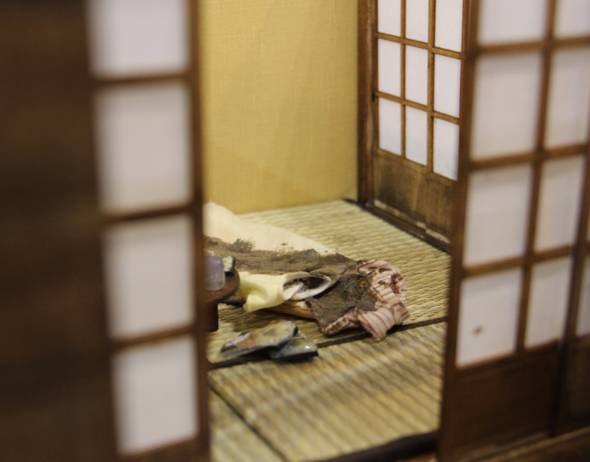 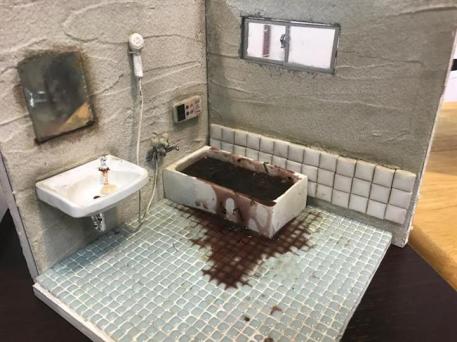 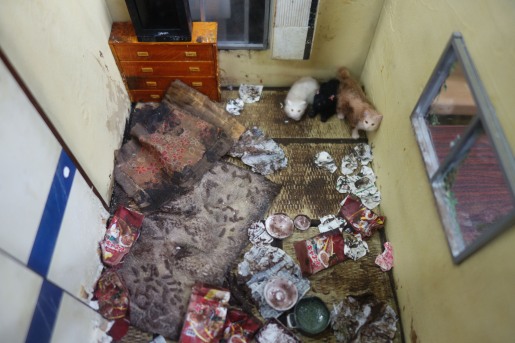