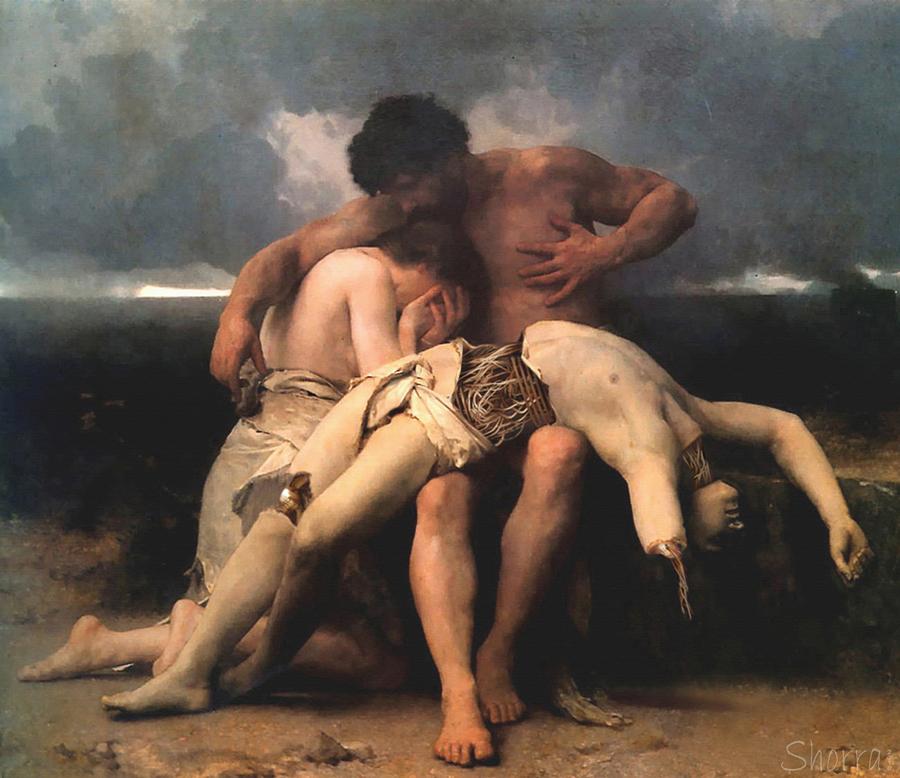 I’ve written before about how the collage, once banished to kindergarten art class, made a comeback as a serious (if ironic) art form in the 2000s. I argued that this was primarily driven by technology, which, in preserving the detritus of the past and serving it up to us regularly via the internet, has made us aware that we are nothing if not a culture of excess. (See also Moon Patrol.)

A newer but related trend is the remix, where one takes old art and re-purposes it. The simple version starts with the same kind of detritus as collage — prints or magazines or thrift store paintings — and physically modifies them, as in Chris McMahon and Thyrza Segal‘s monster series. (Click for a larger image.)

The more complex form digitally modifies classical works of art, usually by adding a contrasting motif, something that doesn’t fit, such as the android in DeviantArt-ist Shorra’s remix of William-Adolphe Bouguereau’s 1888 painting “The First Mourning,” or the headless woman in Robin Isely’s remix of Charles Joshua Chaplin’s “Reflection” (below), in which a young woman examines herself in a mirror. 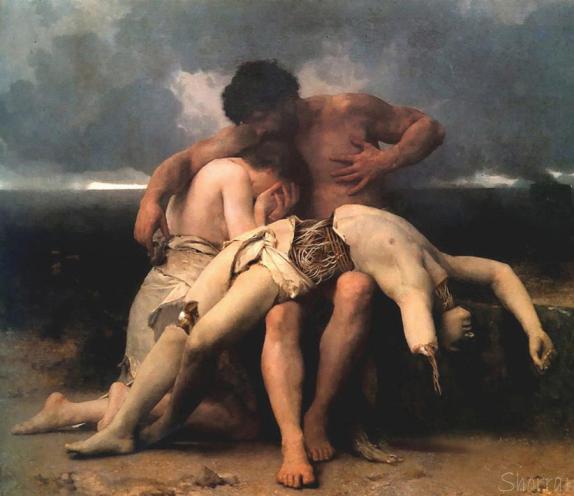 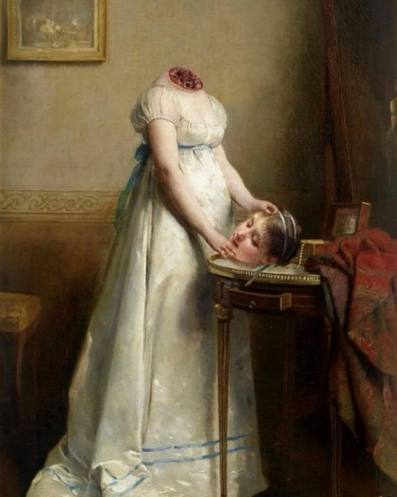 Unless you’ve studied art, you probably haven’t seen the originals, which is important. To remix the Mona Lisa, for example, as countless commercials and advertisements have, is to remix a living symbol. Certainly, we don’t relate to it as the artist imagined. It is not living as it was when painted. It exists now only as a symbol of art par excellence, but it does exist.

To most of us, the paintings above are nameless. They represent “bygone times” rather than any specific era or message, which is now lost on us. Thus, what the modern artists are remixing is not the painting or its content but our conception of the past, so creating an entirely new message: that we here in the future are broken.

Note how the new subjects of these paintings are, first, inhuman, and second, not alive in any meaningful sense. These works are part of the larger cult of decline, which I have also written about before. Never mind that the world has supposedly been on the edge of collapse for hundreds of years, as with the return of Christ, every generation is ready to believe it’s immanent all the same.

The new genre of the classical remix tells us that our culture is “broken,” that its deranged from its beautiful if somewhat bland and boring origin. But then, nostalgia is like pastoralism. We don’t want to live under the norms and restrictions of the past any more than we want to live in a pre-industrial country herding sheep and living in a hut. But since we believe those modes of life are more authentic and virtuous than ours, neither do we want them to die. We want someone else to live them on our behalf so we can keep watching Netflix.

But arguably the most important aspect of these works are that they’re a part of the very spectacle they criticize. We’re not meant to be horrified by Isely’s serenely headless woman any more than we’re meant to be alarmed by our own derangement. Indeed, we’re to laugh or marvel at it. In that way, these images announce the debasement of modern culture while at the same time participating in that debasement.