It was Einstein, supposedly, who taught us that space was not a featureless plain but rather a warped and crannied canyon distorted by the weight of the objects it contained. But the old sages, while they would not have described it that way, nor measured it precisely with mathematics, were aware of the effect. It had been known since ancient times, and later forgotten, that there were creases in the world whose insides could not be reached directly, simply by traversing a line between here and there; that certain clefts in the forest or under the sea would, if approached, say, from the east, deposit you back onto the path, but if from the west, worm you someplace else entirely; that there existed entire kingdoms that, like heartbreak, you cannot find if you are looking for them but cannot avoid if you are not.

Einstein’s theory imagines the universe curved and smooth, like the legs of a well-polished table, or perhaps vinyl left too long in the sun. But put either of those under a microscope and you won’t see a flat surface. At the narrow scale there are mountains and valleys and wrinkles and gaps. Even holes. Entering such furrows requires more than just the proper trajectory. You have to perceive where you are going. Thankfully, one can, through various methods of disorientation, open even the untrained mind, albeit briefly, to different structures of space than the flat one regarded by our senses, which is why the most peculiar destinations, the ones anyone cared to sing about in the time before writing—fairy castles and dragon’s dens—tended to be preceded by portals and labyrinths, or were only reached through trance or meditation. The designers of modern cities, without ever intending it, have replicated this effect accidentally in, for example, the winding, branching paths of subway exits, which turn the traveler about without reference. Once we reach the street, we find the entire city has twisted on its axis, like the wild swing of a compass needle. Or else it’s its own a mirrored reflection, with north turned south and west, east. If, like most people, you do nothing but stand and indulge a few befuddled blinks of your eyes, the wrinkle squeezes you out and you return to the city you know. But if you can hold that state in your mind, ephemeral as laughter, and if you can move against it, then you can step through to someplace else, which is exactly what I had done.

I turned and saw a barrier, a crack in a cliff that had not been there before. It was jagged-walled and no more than a few feet wide, but the flat earth continued through it to the far side.

I heard another snap, closer still, and did not hesitate.

Inside, it seemed even quieter, if that were possible, and after walking a hundred paces, my hands alighting the walls lest they slam shut and crush me, I emerged into a different forest, a denser forest of evergreens that seemed trapped in perpetual gloaming. Ferns covered the ground, as they did in the forests primeval, and I tread a soft carpet of fallen needles teeming with ants. Insects chirped softly in the distance. Everything smelled of pine.

“Who goes there?” a distinctly baritone voice demanded.

I spun round and saw nothing but the dim trees and ferns and an imposing pile of twigs and moss gathered to one side of the stony gap. It rose up immediately among the trees. I saw a face and a chest and two arms but no legs.

“Who are you?” he demanded. Then he relaxed. “Oh. Excuse me, my lady. I didn’t recognize you without my spectacles.”

The question seemed to stymie him, and he thought hard.

“Is it a riddle?” he asked. “I was never very good at riddles. I was supposed to ask one of every visitor, but I could never remember the answers.” He paused. “You won’t tell anyone, will you?”

“Of course not,” I said. “I’m very sorry to say this, but you’ll have to tell me again who you are.”

“Who I am?” He stood straight. Even without legs, he was twice as tall as me. “I thought it would be obvious by the uniform. I’m the guardian of this place.”

He bent his leafy head to his riblike chest of branches, inside of which were clusters of dead leaves and moss. “Oh dear. Where has it gone?” He took a deep breath. “My uniform!” he yelled.

A pair of minks hopped down from the nearby evergreens and curled on his head, one atop the other, like a hussar’s fur hat. A cluster of silver insects scurried from his insides and arranged themselves head-to-head in a star shape on the upper left of his chest, like a badge. Blue wildflowers budded in rings around both of his cuffs.

“There,” he said, adjusting his hat. A tiny face appeared from it and sneezed meekly. “That’s better.”

“Thank you, my lady. I believe it is very important to take pride in one’s appearance.” He trilled the R in pride fantastically.

“May I ask you something else?”

Another worried look flashed across his face. “Only if I know the answer.”

“Well . . .” That question seemed to surprise him as well, and he shifted his prickly mass as if to recline in contemplation. He was a complete gnarl of leaves and twigs. His beard was a carpet of green moss, and it wobbled when he spoke. “I don’t know. Aren’t you?”

“I was once. But that was a very long time ago.”

“Ah, I miss the very long times ago,” he said, yawning. Even his tongue was a broad leaf, and it unfurled like a fern bud. “You could really stretch out in them. The times today are so curt. Have you noticed it? Never bother to stick around, as if they’ve got some better place to be. Rude, if you ask me. But what brings you out today, my lady? Another adventure?”

“I don’t know. I didn’t know I was having adventures. I seem to have lost some of my memories.”

“No! That’s a terrible business. Terrible. Memories are like roots. They ought to stay where they’re planted.” He leaned closer like he wanted to tell me a secret. His face was as tall as my chest. “You know, when most people lose something, they wait until the last place to look before finding it. I like to start there. Saves time, you know. That’s important since there’s so much less of it these days.”

“Well, I don’t think I have to worry about that. I’ve only ever kept my memories in one place.”

“Smart,” he said with a wink. “Very smart. Then you don’t have to worry where they’ve got off to. Have they escaped before?”

“Hmmm. Tricky . . .” His leafy fingers stroked his mossy beard. “Are you sure there’s nothing wrong with where you’ve kept them?”

“Not entirely. But I’ve given it a good once-over, and it seems sound.”

“You know,” he said thoughtfully, “I lost some memories once.”

“You did? Where did you find them?”

He opened his mouth to answer. Then he stopped and scowled at the heavy canopy over his head. “I don’t remember.”

I smiled. “Well, I’m afraid I shall have to keep looking.”

“Quite right. Quite right. Best not to give up, and all that. But you’d better hurry. The train is coming.”

“Yes. It always rattles the old bones as it comes over the peak.”

I looked across the overgrowth. It was identical in every direction. If there’d been a path, it had long since been swallowed by the ferns. “Is there a platform?”

“Platform?” He thought for a moment. “Oh dear. I hope we haven’t lost that, too.” He pounded his heavy trunk on the ground and I nearly fell. “Get up, you louts! The lady needs to know the way.”

Fireflies blinked among the ferns. They flickered as they drifted up, like a dance of constellations. They floated on the air and gathered in groups glassless street lamps that rose here and there among the trees, remnants of a bygone age. I hadn’t noticed them in the perpetual gloam, or if I had, I thought they were dead trees. A path was lighted, a gas-lit walk through a twilight forest. It was breathtaking.

“Straight ahead,” he said in his baritone. “Now if you’ll excuse me, I was dreaming of the very long times ago . . .”

And with that, the minks jumped off his head and he sunk back down.

rough cut from the fifth and final course of my epic occult mystery, Feast of Shadows. Part One is available now. 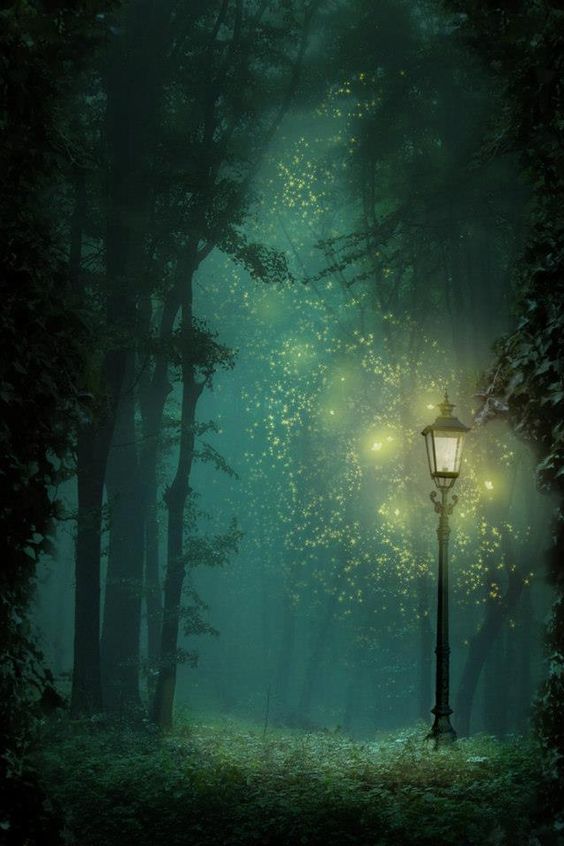