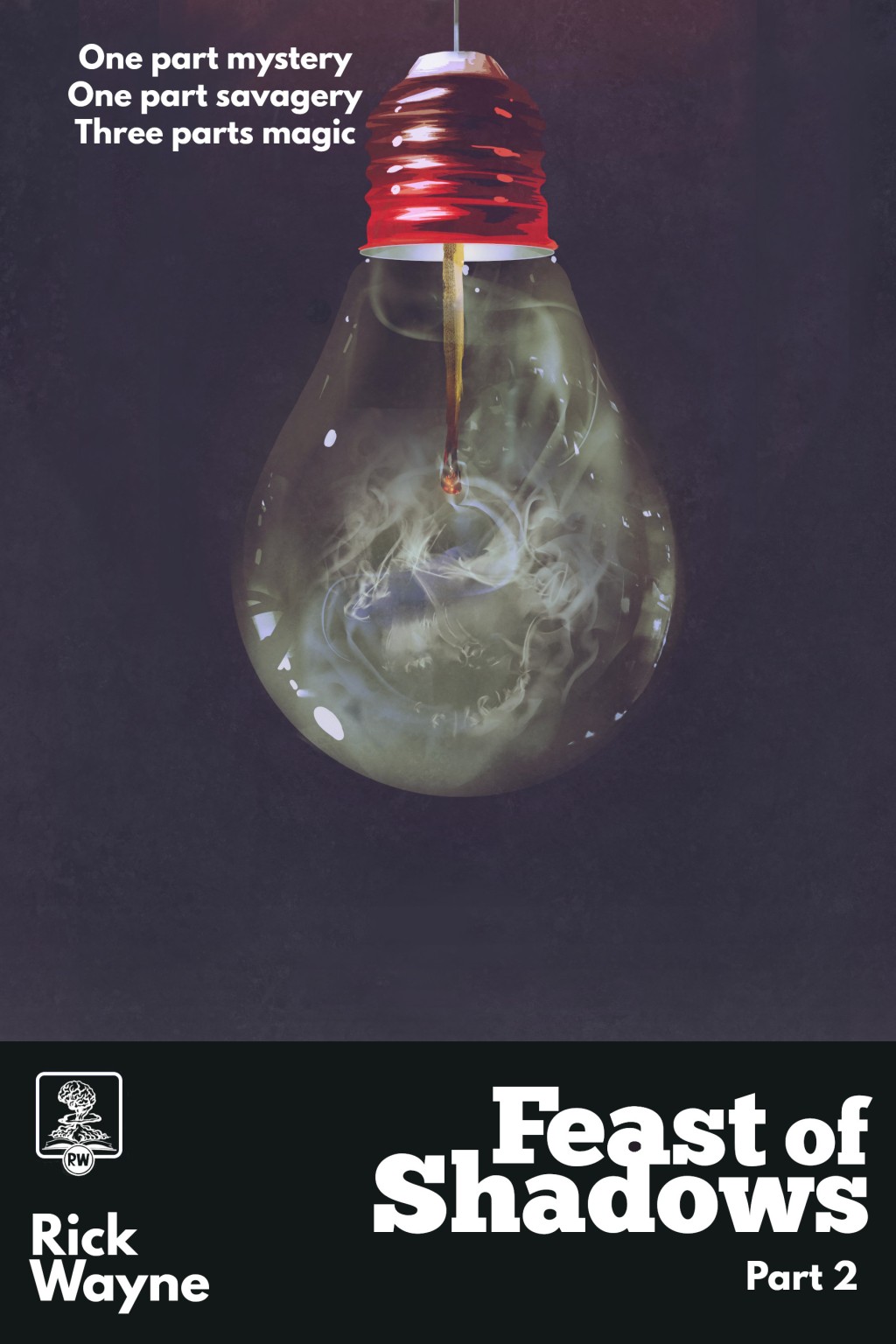 This book is highly unusual. To start, it isn’t one story. It’s five mysteries, or “courses” (as in a meal). Each is told by a different narrator. Each not only completes a full narrative arc for that narrator but contributes to the larger story: a battle between the world’s greatest sorcerer, who is never the POV character, and his unseen foe.

Each course is pulp-novel-length, which means collectively the story is quite long. But again, it’s told through five distinct narrative arcs, each in a different voice. Since a tension-resolution is never very far away, the reader experience is (hopefully) not one of tedium.

The length poses some commercial challenges, however. 85% of my sales are digital, but that doesn’t mean I can ignore the print market. Small producers like me only produce paperbacks economically through services that have specific drawbacks. In short, my printer can’t handle a single volume of this size.

Even if they could, frankly, such a tome would be very unwieldy, all of which necessitates breaking the story into two parts. Part 1 ends on a (unintentional) cliffhanger right at the climax of the third mystery. Part 2 includes the conclusion, a short fourth course — sort of like the calm before the storm — and the whole of the fifth, which I have been working on for over a year and which is a full novel in and of itself.

The narrator of the fifth course is introduced in earlier mysteries, where we eventually discover she is immortal. As such, the final mystery braids two narrative strands:

The chapters of the fifth course alternate between these two stands, similar to what Ursula Le Guin did in “The Dispossessed.” In many cases, lessons or items the character earned in the flashback chapters come to be relevant in the very next “real-time” chapter.

Obviously, because the book is being produced in two parts, the first of which will be available shortly, I need two covers. I’m pretty sure the image below will be the second, which I decided doesn’t need to be as immediately captivating as the first. That doesn’t mean it can be dull — merely that readers will make their decision to purchase or not based on where they will start reading.

However, the second cover does need to have a similar “feel” such that the books are clearly linked. Unlike a book series — as with my last project, THE MINUS FACTION — I don’t think these covers need to have the same layout but with different figures/poses and a different foreground color, which is how most series create visual continuity.

I said in a comment the other day that covers have nested priorities. First and foremost, they need to communicate the genre, setting, and tone (or primary emotion) of the book — where the function of fiction is to give the reader a satisfactory emotional experience — so that readers have a sense of what they’re buying. Movie posters have to do the same.

After that, the title needs to be clearly legible at Amazon thumbnail size — less so the author’s name, unless that’s a significant selling point. If you look at a typical Stephen King book, for example, his name takes up more space than either the title or the art. This is because, whether readers are conscious of it or not, they treat authors as brands, and the psychology and purchasing behavior are the same.

Good covers also visually pose a genre-relevant question or conundrum that they don’t resolve. Thriller covers often try to create tension. (Will the heroine survive?) A horror cover might invoke morbid curiosity. (What horrible monster lurks under the basement?) And so on.

Only at the end of all that do you shoot for that elusive “something else,” what we might call visual appeal, which is almost impossible to define. Many covers lack it simply because 1) it’s very difficult to achieve, especially given other constraints, and 2) it’s less important — not unimportant, but less important — than those constraints, at least from a commercial point of view.

As an author and occasional hack cover designer, I am in the minority when I say covers do not actually need to depict a scene from the book. This is because covers are explicitly not for fans of the book, or for anyone who’s already familiar with it. They’re for new readers exclusively.

That’s not to say a cover can misrepresent the book. Readers absolutely shouldn’t feel tricked or cheated. But it need only capture the figurative rather than the literal content of the pages.

The now-classic example of this is the Harry Dresden series. Every cover depicts the titular wizard-detective in a broad-brimmed hat because whoever designed the original cover decided that’s what a wizard-detective should look like. Every cover since has depicted Harry in that hat, despite that he doesn’t actually wear one.

The cover above resonates with me deeply because, besides checking most of the boxes outlined above, depending on your tastes, it actually does tie to a scene in the book, and not just any scene, but the climactic scene of the entire two-volume epic occult mystery, in which high forces of light and shadow face each other with the world between.