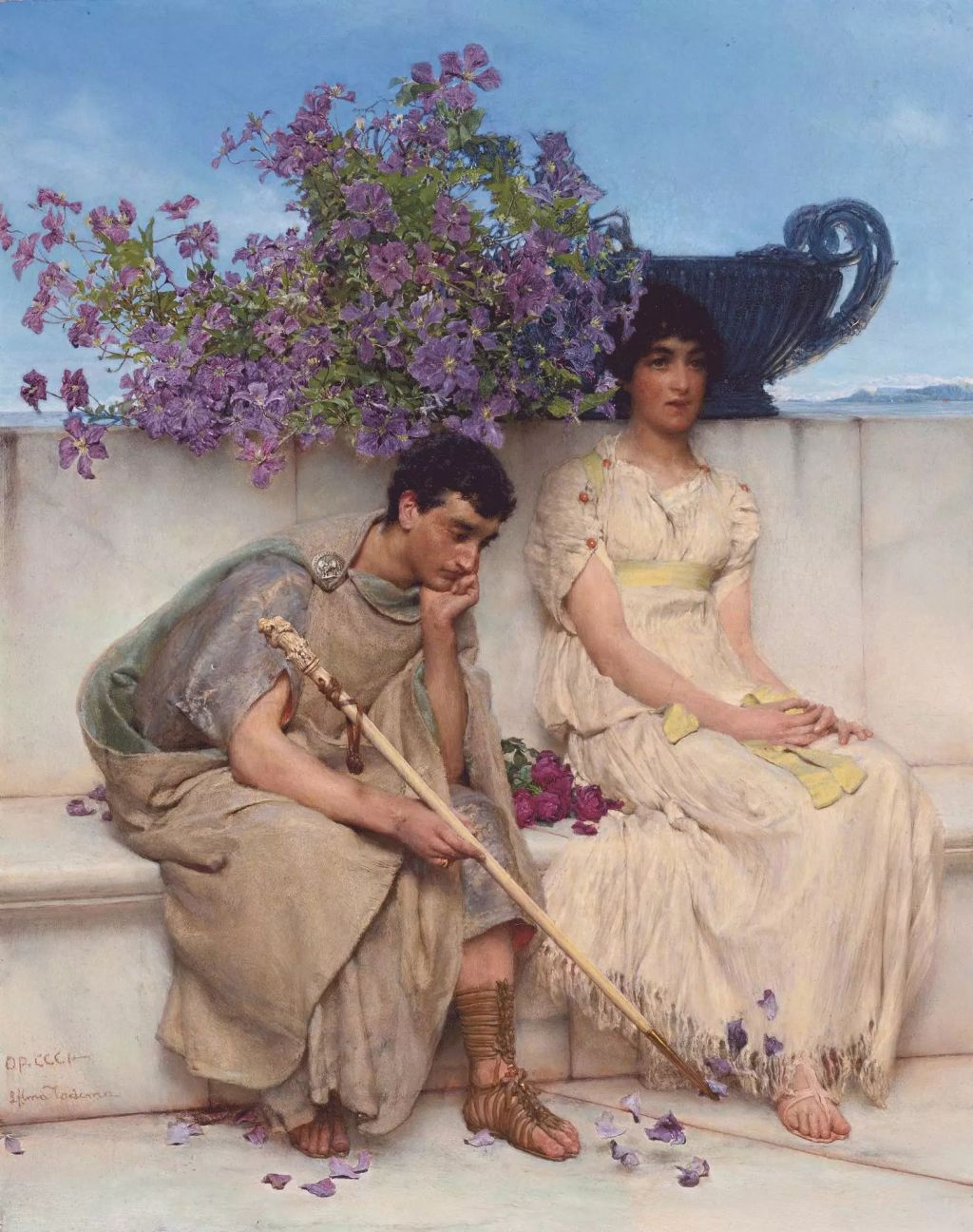 Lawrence Alma-Tadema (1836-1912) was a Dutch-born British artist who became one of the wealthiest painters of the 19th century. A talented marketer as well as painter, he anglicized his name from Laurens to Lawrence so he could be better remembered in the English-speaking world. He also added the forename Alma so that he would appear near the top of alphabetized lists — the equivalent of calling your business AAA Plumbing in the days of the phone book, or SEO today. He also invented an innovative numbering system to make it hard for forgers to pass off fakes as his genuine work — a kind of basic copy protection.

Although wildly popular in his time — he was knighted in 1899 — today he remains largely unknown outside the art world. Indeed, his works were almost completely ignored until the 1950s, when they found commercial use as inspiration for set design and matte painting for blockbuster movies such as Cleopatra and Ben Hur. While making The Ten Commandments, famed director Cecil B. DeMille would regularly look at prints of Alma-Tadema’s paintings, inspired by Alma-Tadema’s ability to create personal drama within a grand, wide-angle perspective. To us, his paintings can look a bit like stock images of the past, but only because stock images were created from them.

That “wide-angle drama” that so inspired DeMille is a hallmark of Alma-Tadema’s genius. Classic depictions of important historical or religious events, such as the finding of baby Moses in the reeds, are typically full of rage and portent, where even the people depicted clearly have a sense of the future importance of their acts, and in that way, they are distant from both us and from themselves. As players of predestination, their story is inescapable. Indeed, most of them are doomed.

The people in Alma-Tadema’s work, however, look very much like people today, or any day. In his depiction of the discovery of Moses, for example, several of the porters conveying the queen on her caravan are clearly bored or annoyed or their attention is otherwise drawn elsewhere. Thunder doesn’t break in the background. Angels do not sing on high. There’s just a foundling in a basket — a not altogether uncommon occurrence in the old days — which some rich woman has taken a fancy to, because she can.

If this were a Renaissance painting, you would be able to draw straight lines from the eyes of all the figures which would converge on the baby Moses at the vanishing point. Here, even the women carrying the basket seem to care less about the baby than how they’re going to get him up the approaching bank.

Despite that his paintings were used in movies into the early 60s, Alma-Tadema remained gauche in the art world. His works were not exhibited, and dealers, who had once paid large sums to acquire them, let them gather dust in basements. Sir Lawrence was, in a sense, a victim of his own success. Seeking to ride his coattails, marketers in the early 20th century copied his style on everything from perfume advertisements to boxes of chocolates. Once so breathtaking, his work became associated with a vulgar commercialism. Seeking to avoid the stigma of association, collectors no longer displayed his works in their homes or galleries, and he became all but forgotten.

Unlike Van Gogh, who enjoyed no commercial success in his life but who challenged and ultimately changed the art world, Sir Lawrence’s art merely depicted culture rather than provoked it. His paintings, while technically advanced and visually stunning (especially when seen in person), did not inaugurate a new style or epoch. They merely epitomized one. And in that way, they didn’t serve the needs of the elites — critics and art historians — who are the retrospective arbiters of “good taste.”

Interestingly, we owe the “rehabiliation” of Alma-Tadema’s work entirely to one man: fellow millionaire marketer Alan Funt, creator of the TV show Candid Camera and one of the founders of what we now call reality TV. While browsing a private art gallery one day in 1967, Funt was approached by the dealer, who asked him if he’d like to see something by “the worst artist who ever lived.” The man then produced Alma-Tadema’s “The Voice of Spring” (below), and Funt bought it on the spot for a steal.

Funt went on to collect a number of Sir Lawrence’s paintings, only to sell them in the 1970s after discovering that his accountant had embezzled $12 million from him. Bankrupt and facing large debts, Funt liquidated his art collection, but by then, interest in Alma-Tadema had revived and Funt cleared nearly half a million dollars on Sir Lawrence’s paintings alone — over $2 million in today’s dollars and orders of magnitude more than he had paid.

Take the painting below, for example. Sir Lawrence originally sold “The Roses of Heliogabalus” to Sir John Aird, 1st Baronet, for £4,000. It depicts an apocryphal episode from the life of the Roman emperor Elagabalus, also known as Heliogabalus (204–222 AD). According to the “Augustan History,” the emperor unexpectedly dropped “violets and other flowers” on his guests from a false ceiling in such quantity that some of them were smothered to death — something of a lesson about conspicuous consumption.

After the artist died in 1912, the painting was displayed publicly for a time, but as Alma-Tadema’s reputation started to plummet, the painting was sold by the 3rd Baronet, grandson of the original purchaser, in 1935 for 483 guineas. Twenty-five years later, it was put up for auction, where it failed to sell at any price and was “bought in” by Christie’s for 100 guineas.

Yet, even with his reputation revived, Sir Lawrence is largely unknown today outside the art world. I suspect that’s because, first, Hollywood co-opted his style into a visual language that is well-known to us, which makes his work seem a bit stale or uninteresting. Also, even though Alma-Tadema based his images on the best archeology of the time, we’ve since learned better, which further adds to their apparent quaintness.

Second, his paintings frequently depict people and scenes from the ancient world, which, while part and parcel of common education in the 19th century — and therefore as recognizable to Sir Lawrence’s audience as, say, a painting of Eowyn and the Witch King would be to us — most are nevertheless completely foreign to most people today. We can look at his paintings and recognize that these are Greeks or Romans, but there is no “a-ha” moment of recognition. We have to be given the context.

This, for example, is “Caracalla and Geta: A Bear Fight in the Coliseum” (1909). Odds are, unless you have a classical degree, or a hard-on for Roman history, you don’t know who those people are or why it matters they’re about to watch a bear fight — and yet neither the stage nor the bears are depicted.

Caracalla and Geta were brothers. After their father died, they ruled as co-Emperors of Rome — for all of one year, until Caracalla (188-217 AD) had his brother killed. The men were, along with Elagabalus, members of the Severan dynasty, which was the last patrician family to rule the empire. Fifty years of political chaos followed the Severan fall in 235, where a variety of rebellious generals, warlords, and rich men made successive claims and counter-claims to the throne. Some lasted no more than days.

The next strong emperor, Diocletian, who ruled from 284-305 AD, was born in Dalmatia (present-day Croatia) to what we might call a “middle class” family. The bear fight, then, is not just another spectacle of cruelty common in the empire, although it’s that, too. In fact, given that bears are not literally depicted, the actual bear fight — the spectacle for the audience of the painting, as distinct from the audience in the painting — is the muted conflict between the two brothers, itself symbolic of the inter-family fighting that plagued the Severans and ultimately brought low the entire Roman aristocracy.

Look at the painting again. The woman at the center, possibly the boys’ mother, gazes directly at the viewer with a look of concern, as if troubled by the hints behind her sons’ competitive banter. Of course, if you don’t know that, it just looks like a pretty picture.

Have some more. This is “The Education of the Children of Clovis.”

Clovis I (466-511 AD) was the first king of all the Frankish tribes and therefore the first king of what became France. The name Clovis is the Latinized version of his Frankish name, Hlōdowig, meaning “great fighter,” which was probably a given title, like “magnus.” Hlōdowig is the precursor of the German Ludwig, by the way, and all its derivatives in other languages: Luis, Luigi, Lewis, and Louis, the latter borne by 18 kings of France.

Look again at the painting, at its realism. You can almost feel yourself in the courtyard, where the thud of the ax resounds off the marble. The villa itself is late Roman. Indeed, the typical Roman house was a square organized around a central courtyard, just like this. Symbolically, these people are living in the house of Rome. But Rome is no more. This is France, and education is no longer the works of Ovid and Aristotle but the arts of war. This is a depiction of the myth of the Dark Ages.

Compare that to this painting, “The Pyrrhic Dance,” which depicts a war cremony in ancient Greece, somehow more refined an elegant despite that both are preparations for slaughter:

The painting below is a depiction of an apodyterium, or undressing room just outside a Roman women’s bath. The figures are not sexualized, nor is the viewer greeted as an intruder. The woman removing her ankle straps takes no notice of us at all, nor do any of the people at the back. Yet, we participate in the scene, are almost invited in, by the gaze of the woman in the foreground, which, along with the fine detail — note the cubicles above the bench for storing possessions — is all that keeps this from being yet another voyeuristic invasion on the part of a largely male audience.

Next is probably my favorite work by Sir Lawrence, his painting of his daughter, Anna. It exhibits his technical brilliance of course, but also seems to capture the essence of this young girl. He’s neither gloried nor degraded her. Indeed, the painting seems almost like a candid photograph taken just as she entered the room bearing flowers for her father’s desk. In looking at it, it seems almost that we know her.

Here are a few more.