Five years ago, a Jewish mystic living in Denmark was found impaled on the spire of a medieval church. It was not clear how she had gotten there, since all points of access to the roof were locked and sealed. She seemed to have been propelled with force, however, since a couple of her limbs had been literally ripped free of her body. They were never recovered. It was assumed they had been taken by animals—rats and falcons.

Three years ago, a lifelong aid worker then living in Ethiopia near the Somali border was found murdered in her simple flat—hacked to pieces. Some of her body parts were thought to have been taken as trophies. The local government blamed Somali mercenaries since the pallets of aid supplies were raided, although it was never clear if that had happened before she was killed or after.

Two years ago, a Shinto priestess—one of a very few number of women given the honor in Japan—was cut to pieces by her brother with a katana after an argument over money. He claims to have no memory of the attack, nor of dumping her bits into a nearby river.

Last year, a local community organizer right here in New York, Alonso White, walked into the offices of a capital investment firm and blew himself to pieces, despite having no signs of depression or suicidal ideation. In fact, his family said he seemed excited about an upcoming run for city council. The damage to his body was so extensive that not all of him could be recovered. The medical examiner estimated that up to seven pounds of body weight were missing, although that was a guess since he had disappeared several days before and may not have been eating, making an exact accounting impossible.

A little over six years ago, while walking in the mountains near his monastery in Tibet, a 12-year-old boy was set upon by a bear, or maybe a snow leopard, and torn limb from limb. The reason the local authorities were certain it was an animal, and therefore not murder, was because of the complete savagery of the attack, and that no human footprints were found, and that the weapon was “clawlike,” and that some of his long bones were missing. He was supposedly the fourteenth reincarnation of the Great Lama Something-something Rinpoche. There’s a picture of him I found online. It had been taken the day before his death, so it had been cropped and used at his funeral. The full image showed him smiling and happy in his red robes, surrounded by local villagers, who had come to ask his blessing. One of them, off to the left, wasn’t looking at the camera. She was looking at him—blankly. She was young, had clear signs of Down’s, and was a spitting image of Alexa Sacchi. Her skin was well-tanned and a little darker than I remember, but there was the same dark wavy hair, the same roundish face.

There used to be saints in the world. Not even so long ago, if you think about it—people like Mandela, who rotted in prison for three decades. And when he got out, not only pardoned his jailers but forgave them. The racists. The men of apartheid. These days it’s quaint to believe in saints. No sooner do you suggest one than someone stands up to correct you. We’re told a saint isn’t simply a superior human but a flawless one. And what human is flawless? The earnest and well-intended people of this world did to compassion the same thing they did to reason. They said truth was infallible, so if science was ever wrong, then it must not be true. And if any flawed thing is just as good as any other flawed thing, we may as well believe whatever we want. We may as well be whatever we want. They couldn’t convince us to choose evil, not openly. They tried in the last century with Hitler and Franco and Stalin and Mao. So they convinced us there was no such thing. If evil isn’t real, then neither is good. It’s just us and our shabby choices, where we tell ourselves we’re no worse than anyone and no one is better than us. It sounds so just and fair, right? Endless servings of equal pie for all.

So we killed the saints. They didn’t die by our hand, but they may as well have. Because we didn’t just stand by and let it happen. We shouted them down. How dare anyone challenge us to choose what’s right? Who are they but flawed humans, same as anyone? Why should we care any more what happens to them than we do the weak or the wicked?

I opened the fridge and stared at the box.

He said everything I needed to know was in a box of risotto. I unhooked the lid. It didn’t look like much—gruel, really—but I gotta hand it to the man. It was fucking delicious—earthy and salty and a tiny bit sweet. But not candy sweet. More like maple syrup. Or maybe teriyaki sauce. I just wanted a taste and ended up eating the whole damned thing.

An hour later I was squatting in the corner, shivering and sweating like a pig. I was in someone’s house. I didn’t know whose. I could see Alexa, almost as if through the walls. I knew exactly where she was, and I knew she was watching me. Waiting. But I couldn’t get to her. There was nothing stopping me. I just couldn’t get there. I moved forward through the house, up the stairs or down the hall, knowing that was the right way to go, but I could never make any progress. I wanted to hit something. I was so angry. So frustrated. She was right there! Looking at me even! With a calm smile that begged me to join her. There was nothing stopping me. Why couldn’t I get there? I got mad at my legs, at my feet. Only when I looked down to curse at them, they were folded underneath me. I was sitting cross-legged before an old woman in a desert. And by old I mean like the mountains and the stars. She had a sparse beard, like the fuzz on a wrinkly fruit. I heard the throb of drums and felt the pulsing breath of the sky.

And over it all, that deep hum of a bull-roarer spinning for all time, like the wristwatch on the arm of eternity.

The old woman dipped a finger into a bowl of blue dye and reached out to touch my forehead.

Beware the wolf with three eyes.

And then I woke. I was in my room looking up at the drab ceiling. My alarm was next to me. But I could see the wolf. Clearly. It was so big. A giant. Its head hung over me. It wasn’t angry. It wasn’t snarling.

It was waiting. For something.

Then, in the fur above its two piercing eyes, a third opened.

And I saw the stars.

I sat up. I was drenched in sweat. I looked at my alarm clock. It had only been a couple hours, but my stomach burned with hunger. I had wet myself. I had vomited. At least once. The room stank of it. I reached for my phone, but it was dead, and I realized it hadn’t been a few hours. It had been twenty-seven. That bastard chef, the old shaman, had served me a hallucinogenic mushroom risotto. Sent me on a vision quest. And I’d been tripping for nearly a day.

I stumbled to the bathroom and splashed water on my face and washed away the vomit and looked at myself in the mirror. I recognized her. That woman looking back. But she wasn’t the same. I grabbed my razor, the one I used on my legs, and shaved my head in a hurry, as if my hair were polluted with sin. I cut myself several times, and when it was all done, I stared at the blood.

I’m posting the chapters of my forthcoming urban paranormal mystery, FEAST OF SHADOWS, in order until the book is released. A blend of hard-boiled whodunit and contemporary urban fantasy, it’s been described as “Tolkien meets Dashiell Hammett for dinner in the present day.”

You can sign up here to be notified when the book is released.

You can start reading in order here: The old ones are patient.

The next chapter is: Time to end it 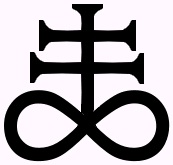 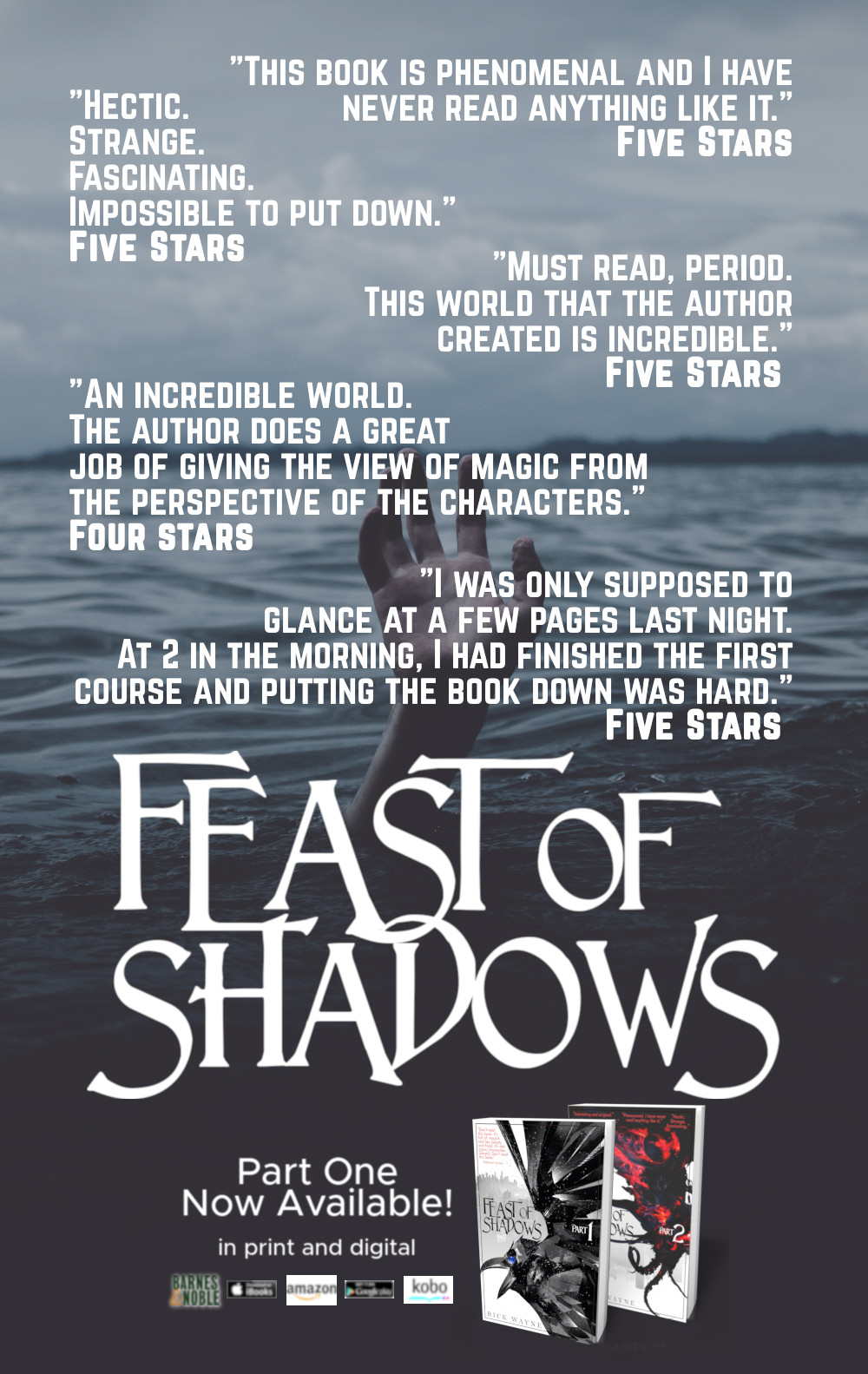