Hugo Froelich created the following diagram, The Stages of Conventionalization, in 1905 for Keramic Studio Magazine.

It proposes a hierarchy of representation, what’s sometimes called a mode of genre. Impressionism, for example, employs a decorative representation, whereas the fractured faces of Picasso are symbolic. They are, after all, still recognizable as faces.

This descriptive hierarchy applies to books as well painting. Indeed, it applies to any medium, including film, sculpture, poetry, and the rest. Even blog posts! The novels of Tolstoy, for example, are iconically realistic. Several of the works of Philip K. Dick, on the other hand, are notably symbolic. (This is different than what we normally call symbolism in prose. Just about every text has symbolism. Not many are symbolic in the way Froelich intends.)

In most cases — the “realist novel” being the exception — the mode and the genre will not be the same. Yet, any genre, be it in painting or prose, will have a mode. Your standard romance novel, for example, is typically decorative because that’s what best accents the tension of the genre: the flutters of love. But one could write romance by scientific report. In fact, much of the tropes of the genre include situations that would involve the police or a reporter, so you could follow the foibles of a love triangle as told entirely in news articles, police reports, eyewitness accounts, and the like.

Such gymnastics of form are, to my mind, the lowest category of innovation: the novelty. It IS innovation, certainly, and if someone wanted to write the kind of thing I just described, there would be genuine value in it. But it would likely never be more than a puzzle box in prose.

Artists of the Western Canon believed, as they moved progressively down Froelich’s diagram, that they were tapping the vein of the universe, that each move away from the local and contingent was a move toward the essential and universal, such that by the early 20th century, the best artists in the West were producing highly nuanced works with strong tribal or “primitive” overtones — effectively eliminating art history as a seamstress nips a stray loop of thread.

They believed that, as we escaped the parochial, we could shed the burdens of our culture and discover, or at least participate, in something superlative, timeless.

In order to understand that, you have to appreciate the existence of the burden they were trying to shed. Take this work by contemporary artist Sean Norvet. Aliens visiting earth for the first time would likely have no idea what to make of it, at least at first. It seems like a painting of a pile of trash.

Think about how much you have to bring with you to unpack this image. You have to know what an aluminum can is, and a milk carton, and salmon steak, and a plaster cast, and a bucket of chicken, and a cigarette, and a lawn chair. But more than that, you also have to know what those things mean: that people recline at the beach, for example, usually on vacation, and so this is a person of some wealth; that juveniles inscribe messages on casts and these can include logos of bands, like Metallica, and that such bands are associated with a white, middle class, suburban socio-ethnic status; that we call idiots blockheads; that fast food fried chicken is unhealthy; that Jesus was pierced through his hands and feet and thence revered as a savior; that a long cigarette with a dangling ash connotes a casual aloofness, like Hunter Thompson in Las Vegas; that women are objectified for round breasts and full hips; and on and on and on.

More than that, you have to know about still lifes and how the medium of painting is supposed to work — that it’s considered very different from cartoon, for example, whose style Norvet copies, in the drooling eyes and the spittle below, to ironic effect.

This picture is something like an indictment of Western consumerism, but it only resonates — if at all — if you are already familiar with the elements of the composition along with the “meta-historical-cultural milieu” (whew) which idolizes the philosophy of decline. Aliens wouldn’t get that, I suspect, without some explanation. Nor would anyone from, say, a thousand years ago. This is because both groups, looking at the culture that produced this, would struggle to find decline. On just about any measure, our present society surpasses everything that has come before: sanitation, literacy, education, morbidity and mortality, access to medical care, amount of free time, potential for self-actualization, number of active human connections, job mobility, entertainment options, diversity of nutrients and foodstuffs, status of women and minorities, penetration of space, volume of literature, breadth of scientific knowledge, styles of art and music, and so on.

In short, you have to already believe in the myth of decline for Norvet’s painting to make any sense, such as the point of the red sky. You have to know that in the 21st century, it’s considered de rigueur to be pessimistic about history, that any optimism, such as that we could find a solution to the environmental crisis or the obesity epidemic, is both utopian and silly, and that the cool kids all think shit’s going down the toilet, man.

By contrast, consider the following piece by Robert McCall, who had a long career painting for NASA. 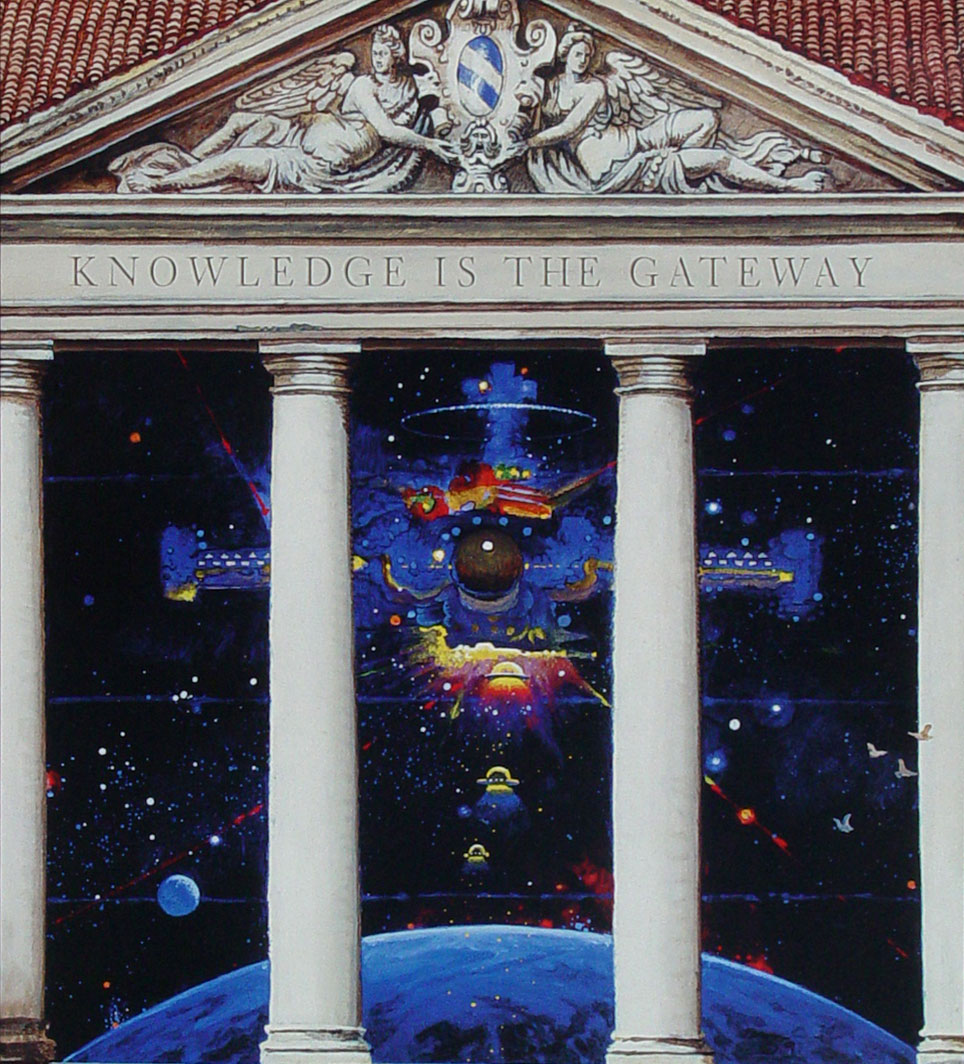 I’m not saying that one is right or better. Neither is ever likely to be considered museum quality. But both were produced by professional artists — that is, our society afforded them a living for their work, so they can surely be “read” as contrasting texts of their parent culture.

There is something that leads us to identify with the message of decline in the Norvet piece, despite the objective facts, and to see the work by McCall as perhaps a bit too martial and simplistic, even childish, despite its subject matter. That implicit understanding is what you come with, fully laden, to every novel, every work of art. That hidden framework is what modern artists have been progressively trying both to illuminate and transcend — to find the universal, perhaps even the divine.

It’s stupid, really. It’s stupid because excellence is an emergent quality and doesn’t reside in primary characteristics. It can’t. What is an excellence of blue? Or of seven? Nonsense, that’s what.

That’s not to say there’s no value in a Rothko or a Pollack. Of course there is. Some of the work from that era is sublime. But if so, it’s because of the elements that don’t participate in the universal: the careful yet unstructured repetition in the Pollack, not unlike the jockeying of people and taxis on the New York streets. Rothko’s calculated fringes are like the fraying of art itself. But none of that is any more essential or sublime than Caravaggio’s mystical use of light, or the peaceful grandeur of the daibutsu Buddha.

Excellence emerges. It arises, like cicadas from the ground, and it need neither be elementary nor abstract. More to the point, the belief that there is ascendancy in higher levels of abstraction requires a prior commitment to the very ideals that 20th century artists were trying to escape: that there exists a place art can occupy where it is free and unencumbered by the circumstances of its manufacture.

Contemporary art, recognizing this fallacy, sort of collapsed in on itself. They’re still sorting through the rubble. I’ll let you know if anything turns up.

The novel fared somewhat better, but then, being tethered to narrative, there was only so far we could go down Froelich’s diagram. There have been abstract and gibberish novels produced, and a rare few — such as the nonsense of Lewis Carroll or the Codex Serafinianus of Luigi Serafini — are excellent, but for the most part, what we want when we experience a book, even a literary or “high art” one, is a story that delivers a coherent emotional experience.

(Note: the order of the telling is unimportant because we always reconstruct an ordered flow in our head. That is, even if you are clever and tell your story in tangents, or in backwards order, our brain rearranges the pieces into a pro-temporal narrative, which is why so many of those tricks of form, such as Christopher Nolan’s 2000 film Memento, can only ever fall into the category novelty.)

This year, across much of the Midwest and Midatlantic of North America, cicada Brood V will emerge in fantastic numbers after 17 years underground. By means we don’t yet understand, they will coordinate their emergence for the exact opposite reason that the artist paints or the writer writes: so as not to be noticed. By appearing in the millions at the same time, the cicadas saturate their predators. All the animals that eat them will quickly have their fill, leaving the vast majority of insects safely anonymous even as they chatter loudly for a mate.

This year also, something like one and a half million new books will be produced. Like a brood of cicadas, each will chatter for attention in a deafening crowd. But where the red-eyed insects want to avoid being eaten, the red-eyed writer does not. We WANT people to consume our work. We WANT to be found. And we’d rather it not be on the last day of our lives.

The best way to emerge, I believe, is not through a novelty of form or a transcending abstraction or any conscious participation in the “literary” or “artistic,” but rather through an uncommon excellence in the common mode of your time and place. And you can do that anywhere in any genre. Write something that rewards, in multiples, the time it takes to read it.